The beauty and the curse of product development lie in the initial hurdle of design – the existence of a multitude of unknowns. Wading through this large pool of uncertainty can cause any project to take an excruciating amount of time before the design direction is narrowed enough that the project can really kick into gear. At the start of the process, you don’t know what will best satisfy the user’s needs and wants; sometimes you don’t even know what the user’s needs and wants are. The process is fuzzy at best and is often described as looking like this:

So how do you begin?

Often the development team is asked to hypothesize what the users’ wants or needs are and what will work best in the given situation. Rather than make blind assumptions, it’s best to derive this knowledge and to inform the process with a rich understanding of the people, products, environments, and scenarios involved in the thing to be created or improved. At Daedalus, we immerse ourselves in the user’s environment, observing the tasks the user is trying to accomplish and the tools used, learning about the frustrations and delights along the way. User research is the process that gives us this rich understanding – helping us to narrow the focus.

But before our research team engages the user, we often first engage our designers, engineers, and product managers in planning the research and determining the methods and techniques that will best help us understand the user and most effectively gather the information we seek. This interdisciplinary team meeting is the first of many collaborations. We’ve found that cooperation between the different perspectives results in a more thorough design and research process.

One way in which we enlist different disciplines into the research process is to create prototypes that can be taken to the user. Prototypes are tools that provide insights, create innovations, and help make decisions because they allow the user to visualize an object or service well before that object or service is concrete. Using prototypes in our research allows us to narrow our focus at a much faster pace and to conduct profound, informative research in a short amount of time. However, prototypes vary a great deal in their form and function, so it is essential to know when, how, and what to prototype in order to effectively and efficiently gain valuable feedback, uncover failures early, and discover creative solutions.

What are some examples of using prototypes as a research tool?

Recently, one of our clients wanted to take a new direction with the form factor of a particular piece of equipment, but wasn’t sure what that direction should be, as previous research had shown some conflicting results. From the previous research, we identified two dimensions to explore and created several form factor prototypes. 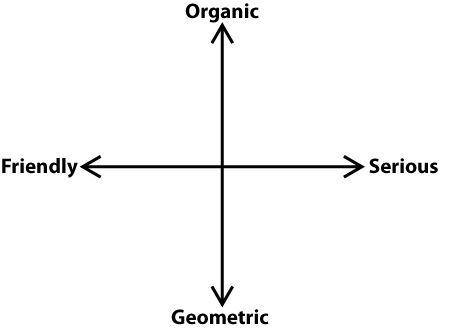 We can’t show you the prototypes, but we can tell you that they were non-functioning prototypes that looked realistic and mimicked functions that might be performed. Each was inspired by one of the four quadrants above. Along with seeing the various aesthetic forms, our research participants could pick up and interact with the prototypes, allowing them to visualize the adjectives depicted in the quadrant chart above, as well as defining the adjectives concretely for Daedalus. This helped us to quickly identify aspects of each form factor that our client should pursue.

We also populated these prototypes with simple touch screen controls, allowing the participants to interact with long-standing features in a new way (this particular piece of equipment had always used buttons and knobs, but our client wanted to explore touch screen options). Again, due to the incorporation of prototypes in our research, we were able to quickly determine how to implement controls in this new domain in a way that the client’s customers would accept and embrace.

In another project, we used a slightly different path to capture users’ desires. We conducted two rounds of research using prototypes of different fidelities that allowed participants to mix and match features to form their ideal product. In the first round of research, we used low fidelity prototypes consisting of a base shape made of foam core with Velcro sides. We then made “features” that participants could attach to the base shape (also made out of Velcro-backed foam core).During this research round, participants made multiple combinations and layouts of features, which generated discussion around the needs and uses of those features.

The second round of research was less about feature layout and combination and more about variations of the feature itself – shape, size, amount, etc. A similar prototyping technique was used to gain user feedback as in the first round of research, though with much higher fidelity prototypes. We used looks-like prototypes with looks-like removable components to increase the realism.

Enlisting our engineers and designers made these prototypes possible. Not only were their skills used to build the prototypes, but their knowledge of the engineering behind the products was crucial in determining the types of features, feature combinations, and feature variations to provide as options to the participants. This allowed us to move very quickly in the process.

Below is an example of what the prototype used in the second round of research described above may have looked like. The prototype used variations of physical touch points – different bottom textures, varying types of handles, and numerous surface level buttons and bezels – that were interchangeable to allow participants to show what works best for them in their environments and with their tasks, as well as their preferences. Extra “peripherals” attached by magnets allowed users to swap features and generated conversation on the ideal device, providing us with the means to determine what the ultimate product might do and contain. 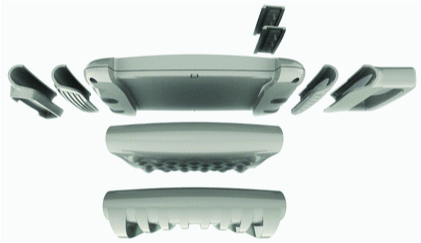 Enlisting engineers, designers, and product managers at the start of our product development process, enhances our research methods, resulting in richer user feedback and insights, unification of the team’s goals and user understanding, and ultimately in a more efficient design and development process.