At Daedalus we recently started a new tradition – we call it the Monday Morning Movie, or MMM for short. But before telling you about our new tradition, let me tell you why we started it. Monday morning – first thing – we hold a planning meeting for the entire office. We review the calendar for the week ahead and plot out where to spend our time and efforts that week. Getting 20+ people together, awake, and focused first thing Monday morning can be a bit daunting – especially after a late night Steelers game.

So, our President, Matt Beale, decided we need a warm-up – one that would get people to the meeting on time and – even better – more awake and in a positive frame of mind. But he also wanted one that would generate discussion and that could be used as a learning and exchange opportunity. After pondering a while, he decided that we’d start a few minutes early with a short 10-minute video designed to get us thinking. Now, like most office workers many of us were already watching the occasional video at our desks and sending some around to colleagues. So, the MMM would also have the advantage of turning that into a group activity, increasing camaraderie in the office. 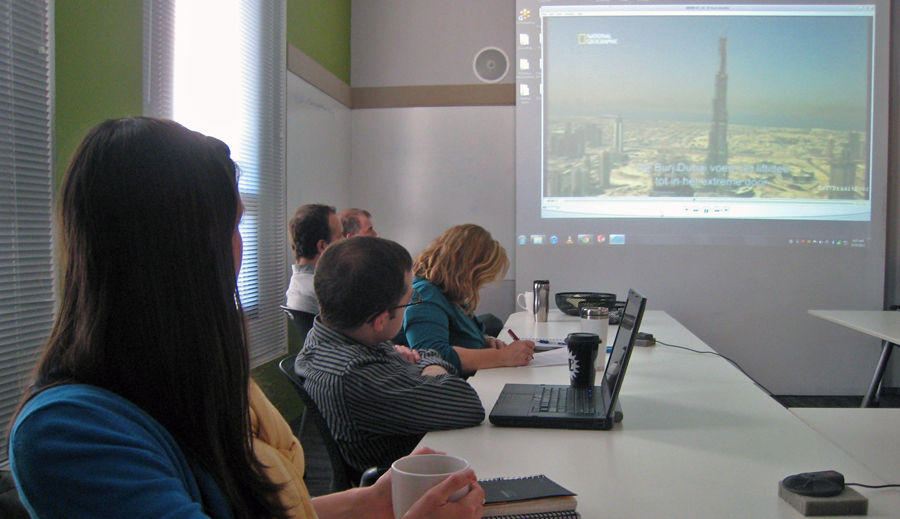 We began the first week with the amazing opening sequence from Game of Thrones and the story behind its creation. We’ve since included movies for technological inspiration, like tiny remote controlled machines and printed circuits for micro-machines. We’ve included humorous videos like Thomas Thwaites’ TED Talk about his attempts to build a toaster from scratch. And we’ve included a few Rube Goldberg machine videos – of course.

We try to make these educational – when Daedalus invited Roger Martin to speak to the Pittsburgh Technology Council we queued up some clips from previous interviews. But we try to keep current as well; when Curiosity landed we learned about the design effort that went into its entry, descent and landing, known to NASA as “7 minutes of terror.” During the Olympics we learned how Oscar Pistorius’ running prosthetics work, and viewed a fascinating imaginary race comparing every Olympic 100 meter medalist since 1896, illustrating how much faster sprinters have become due to better nutrition, training, foot wear, and track surfaces. Following the passing of Neil Armstrong, we watched the footage from the moon landing – a first for many of us too young to remember or born after that monumental day.

We occasionally show movies originating in our own office – stop motion video of the construction of the Evive Station and one us of tearing apart a retired piece of technology for one of our Deconstruction Lunches. You can view our deconstruction lunch on Daedalus TV, our YouTube channel, along with Daedalus video from the Carnegie Science Awards 2012.

So far our new tradition has been a success. One of our researchers recently told us that the MMM creates a team-centered low-key atmosphere that isn’t all about work – when we gather in groups at the office it’s usually for a meeting or brainstorming. One of the designers told us that the MMM is a great ice-breaker for the work-week – he feels that starting the day with a bit of humor and knowledge aids his creativity by letting his mind “wonder and wander.” A bit more succinct, one of our engineers called it a great “mind jump-start”. We’ve even returned to a MMM for inspiration when we started a project that happened to be highly related to some video we had watched a few months earlier. A sampling of some of the videos that we’ve watched are available below.

So that’s how we start our week now. How about you? Are there any interesting traditions at your company that you can share?

Some of the videos that we’ve watched for our MMM:

Honda the Power of Dreams: Failure, the Secret to Success

Thomas Thwaites: How I  built a toaster – from scratch

One Race, Every Medalist Ever